Her twirling scarf emulates the strum of the guitar. Heavy stomps, precise and defined, sound in response to each clap. Her gaze pierces me and I am mesmerized.

I am not Spanish and neither is she. But we are swept up by Flamenco, a dance dating back a few centuries to the southern corner of Spain called Andalusia. It is from these origins that Flamenco grew, expressing hardships of the Spanish Inquisition, displacement and the human spirit. In Mis Hermanas, Rosario Ancer’s most ambitious production to date, she uses this old art form to tell a contemporary story of her childhood in Mexico, her journey to Spain and her arrival in Vancouver, Canada. For Ms. Ancer, who has danced Flamenco all of her life, no other art form would have expressed her story. It shows how universal the art from can be, to be able to resonate with both artist and audience indiscriminate of time and culture. While traditional Flamenco tells stories of its Andalusian origins, contemporary Flamenco retains these roots and adapts to modern influences. However, Ms. Ancer cautions that one must master traditional Flamenco before adding these variations in order to preserve the foundation of the art form.

Mis Hermanas won the Isadora Award for Excellence in Choreography in 2009. It toured Mexico in 2010 including performances in the renowned Teatro de la Danza del Instituto National de Bellas Artes in Mexico City, and western Canada in spring of 2013.

Find out more about Rosario Ancer’s work at Flamenco Rosario and her school in Vancouver, Centro Flamenco. 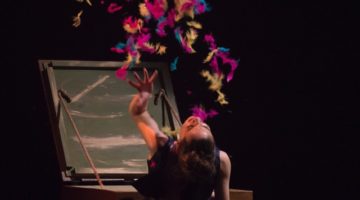